Recipient of the Robert Guthrie Award 2005

Benjamin José Schmidt who passed away on June 6, 2009, was a pediatrician, graduated from Medicine School of São Paulo University (USP), Brazil, in 1955. He started his university career in 1958 at Escola Paulista de Medicina (EPM), also Known as Federal University of São Paulo (UNIFESP), reaching the position of Chair Professor of Social Pediatric.

Together with his colleagues Aron Diament and Oswaldo Cruz, he founded the Lavoisier Laboratory in 1952, which is one of the most respected in São Paulo. In the beginnings of the 60´s, they started research on some Inborn Errors of Metabolism (IEM). Dr.Schmidt has done voluntary work at the Habilitation Center of the APAE (Association of Parents and Friends of the Mentally Handicapped) in São Paulo, an institution founded in 1961.

Always with the interest focused on IEM, he created, in 1976 at APAE, a laboratory for the research of hyperphenylalaninemia, especially phenylketonuria. Together with Dr. Stanislau Krinsky, pediatrician and APAE´s clinic director, and the neurologist Dr. Aron Diament, he had started since 1973 the project for “a National Plan for Study and Detection on Inborn Errors of Metabolism Disorders that could lead to mental deficiency”, which was presented at the Federation of APAE´s Congress, held in Porto Alegre (RS-Brazil). This was the proposal for the installation and functioning of the first specialized center for the population screening of phenylketonuria, as a form of prevention of mental deficiency, after one World Health Organization recommendation since 1968.

The center used the Guthrie technique for collection of blood samples on filter paper (DBS). Until then in all labs in the world, phenylalanine was identified through a semiquantitative methodology (the Guthrie bacterial inhibition assay using bacillus subtilis). However, at APAE SP a quantitative adapted fluorimetric auto-analyzer was employed for the first time in the history. With the implementation of the phenylalanine dosing through this equipment, the first Newborn Screening Program for Inborn Errors of Metabolism in Latin America was initiated.
In order to provide a better and wider support to the detected patients, Drs. Schmidt, Krinsky and Diament created at APAE´s Ambulatory, the first Multidisciplinary Team.
In complement to the screening program, Benjamin Schmidt obtained from Nestle, which produced in Europe the phenylalanine-free ASP milk, the commitment of enough milk free supply donation for treatment of the first 100 cases detected.

In 1976 the Phenylketonuria Newborn Screening Program, extended its research towards the detection also of congenital hypothyroidism in newborns by the measurement of T4 in the same blood spot sample.

In July, 13, 1990, a federal law, (Law Nº 8069), established as mandatory in all Brazil, the execution of examinations towards the detection and treatment of metabolism anomalies in newborns, as idealized by Dr. Schmidt in 1973. Brazil was the first country in Latin America to pass such a law.
Dr. Schmidt participated in the creation of SLEIMPN (the Latin American Society of Inborn Errors of Metabolism and Neonatal Screening). This society is very important in helping countries in Latin America that in 2005 still have no neonatal screening programme.

In 1999 the Brazilian Society of newborn Screning was founded. For its biannual meetings it established a prize for the best submitted work, called “Benjamin Schmidt – a pioneer”. 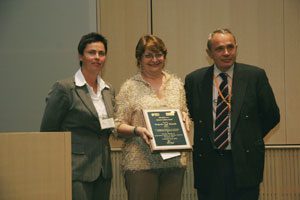