Recipient of the Robert Guthrie Award 1999

Dr. Harry Hannon is Chief of the Newborn Screening Branch, Division of Laboratory Sciences, Centers for Disease Control and Prevention (CDC). He received his Ph.D. from the University of Tennessee in Biochemistry in 1972 and did post-doctoral training at the Oak Ridge National Laboratories. His areas of expertise are immunochemistry, dried-blood spot technologies, newborn screening for metabolic disorders, and laboratory quality assurance systems. In 1978, he established the Newborn Screening Quality Assurance Program at CDC, which now provides services to all state public health laboratories and to over 200 laboratories in 47 countries. He developed the quality assurance program for dried-blood spot HIV testing in 1987.

In 1992, Dr. Hannon was one of the co-recipients of the CDC’s Charles C. Shepard Science Award for his contributions to the HIV Seroprevalence Survey among Childbearing Women. He has over 200 scientific publications and has served on over 20 national and international committees for a variety of laboratory standardization and quality assurance issues. He chaired the committee for development of the NCCLS national approved standard for blood spot collection on filter paper for neonatal screening programs. He has served on the organizing committee for national and international newborn screening symposia. He is an elected member of the Executive Council of the International Society of Neonatal Screening. In 2000, Dr. Hannon was one of he recipients of the U.S. Department of Health and Human Services Secretary’s Award for Distinguished Service. In 2002, he was selected to serve as Vice-President of the International Society for Neonatal Screening. He has 34 years of public health service at CDC.

He was also a terrific grandfather and almost single handedly supports the world wide chains of American burger franchises, ie McDonalds.
In 2009 Dr Hannon was elected honorary member of ISNS. 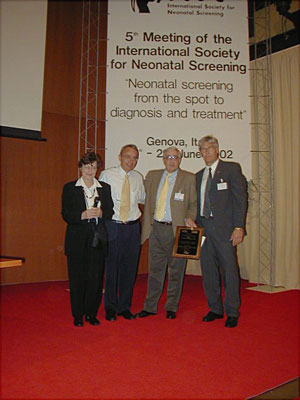