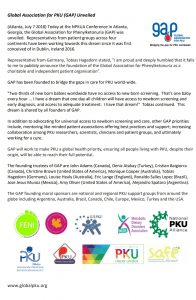 (Atlanta, July 7 2018)
Today at the NPKUA Conference in Atlanta, Georgia, the Global Association for Phenylketonuria (GAP) was unveiled. Representatives from patient groups across four continents have been working towards this dream since it was ﬁrst conceived of in Dublin, Ireland 2016.

Representative from Germany, Tobias Hagedorn stated, “I am proud and deeply humbled that it falls to me to publicly announce the foundation of the Global Association for Phenylketonuria as a charitable and independent patient organisation”.

GAP has been founded to bridge the gaps in care for PKU worId-wide. “Two-thirds of new born babies worldwide have no access to new born screening. That’s one baby every hour. I have a dream that one day all children will have access to newborn screening and early diagnosis, and access to adequate treatment. I have that dream!” Tobias continued. This dream is shared by all founders of GAP.

In addition to advocating for universal access to newborn screening and care, other GAP priorities include, mentoring like-minded patient associations offering best practices and support; increasing collaboration among PKU researchers, scientists, clinicians and patient groups, and ultimately working for a cure, GAP will work to make PKU a global health priority, ensuring all people living with PKU, despite their origin, will be able to reach their full potential.

The GAP founding moral sponsors are national and regional PKU support groups from around the globe including Argentina, Australia, Brazil, Canada, Chile, Europe. Mexico, Turkey and the U

Qatar: The first anniversary of the establishment of the National Centre for Rare Disease

In Qatar, the Hamad Medical Corporation (HMC), and the Heidelberg Univ...

A new article published in the European Journal of Human Genetics, and...

Advocacy: rare diseases mentioned within the framework of Universal Health Coverage at UN

The United Nations Office of the High Commissioner for Human Rights (O...